Another reader wrote to me, having just finished The Value Crisis:

I have just also read 'David & Goliath' by Malcolm Gladwell. You would enjoy chapter two and its description of the Inverted U. I'm not sure how this might transfer to the world of money - although the book does give one or two limited examples. See what you think.

While I was familiar with Gladwell's interesting take on David and Goliath from a TED talk, I had not yet read his book, so I went to the library to read up.  Sure enough, some interesting ideas emerged.  (I confess that this post might hint at some hefty mathematical concepts, but I'll try to keep it simple.)

To briefly summarize Gladwell's presentation of an Inverted-U Curve, he was describing how one might graph the difficulty of parenting versus the wealth of the parent (see the graph below).  While it is easy to see that parenting is hard for a poor parent and gets easier as wealth increases, the argument is that parenting is also hard for very rich parents.  (This Deseret News article explains.)  So the graph goes up (towards easier parenting) as wealth increases, but then it reaches a peak and curves back down - thus the label "Inverted-U Curve". 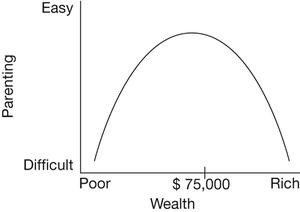 This curve is presented to counter our intuitive assumptions about parenting getting easier as wealth increases - it is not the straight line graph that we might expect.  He suggests that the same curve would apply if we are graphing academic achievement against class size.  In other words, more of a good thing is not always a good thing.  This is something I talk about a lot in The Value Crisis.

(I don't know where the $75,000 figure came from for the graph's peak - Gladwell is notorious for letting the science take a backseat to a good story.  I note that other research talks about general happiness leveling off when annual income reaches about $75,000.  Perhaps this is an interesting correlation or perhaps Gladwell simply borrowed the same figure for his graph.)

The interesting thing for me about Inverted-U Curves is that they suggest there is often an optimal value for things.  In most situations this point is obvious, but we more often get tripped up when the horizontal axis is measuring a number-based value system.  In the monetary number-based value system, more wealth is always worth more.  So we assume that the same valuation applies to the qualitative human circumstances such as ease of parenting.  Not so.

The optimal peak value might also represent the concept of "enough".  However, I caution the idea that such values can be empirically determined and then used as human or policy goals.  The reality for most things in life is that they manifest themselves as polarities - unsolvable problems with no single optimum solution.  An example of a polarity in the business world is teamwork versus individual effort.  Neither is the optimum approach to work.  Sometimes we do better with one, sometimes with its opposite.

Here's another Inverted-U Curve, showing the business relationship between incentives for innovation and levels of competition: 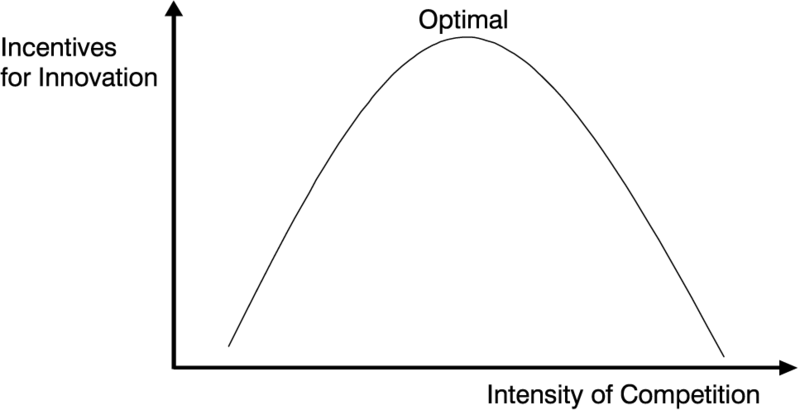 Malcolm Gladwell argues that more of a good thing is not always a good thing, and that sometimes, if we apply the right value system, we will discover optimal states - the concept of "enough".  The Value Crisis argues the same thing, but also suggests that we should be aware of what situations in life are polarities, with no optimal solutions.

The bottom line is that number-based value systems - where more is always worth more (by definition) - are incompatible with the qualitative natural values that are necessary to our happiness and continued existence on this planet.  Decisions that support the maximization of number-based values (such as wealth or sales or economic growth or volume of resources extracted) will eventually go way past the optimal point.

So here's the real question:  Why do we so blindly run our lives and our world in constant pursuit of maximization on the horizontal axis instead of on the vertical one?!
Posted by Andrew Welch at 3:41 PM