This post is a bit of a departure from the blog theme.  Consider it an introduction to the next series of postings (I hope).

I was very excited to see that The ValueCrisis is quite popular with book clubs – even clubs that normally only do fiction.  It seems that readers want to talk about this book with their peers.  That was definitely one of my hoped-for outcomes when writing it.

However, it turns out that some readers wanted to go even further.  A few months ago, two different book clubs (who had already done The Value Crisis as part of their regular gatherings) approached me in the very same week and asked if it might be possible to create a special club that explored the book as one chapter per meeting.

I was ecstatic!  Not only did this indicate an obvious interest in the subject matter, but I had sat in on a few gathering nights when clubs were discussing my book, and they often talked about the same things.  I wanted to know what they thought about other chapters, but I was also determined to shut up, listen carefully, and take notes on whatever they chose to talk about.  Here, at last, might be an opportunity to explore every nook and cranny.

The Caledon Public Library was quite receptive to this very novel idea (no pun intended), and announced The ValueCrisis discussion series as a new program, exploring a different chapter every two weeks. 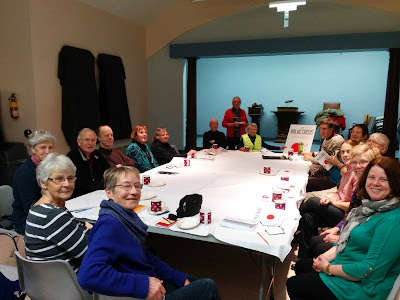 Our first meeting was on .  The weather was a bit dicey and I got calls from four people who had intended to come but were not going to be able to attend the first gathering.  Consequently, I was expecting a small crowd, but the big table ended up with 20 people sitting around it.  We never set a maximum for the series, but if we had, that would probably have been it.  We had a great introductory discussion, and some excellent refreshments!  I hope to have the same at every meeting.

So, the next few blog postings will be inspired by these chapter-by-chapter meetings.  Who knows, I may also get enough detailed feedback that I might attempt a second edition of the book, with clarifications, a stronger message, and updated anecdotes.

Please feel free to join us for any meeting, or contact me about starting a group in your area.
Posted by Andrew Welch at 11:18 PM