The Mystery of the Uncomfortable Barter

One of the truly wonderful things about The Value Crisis discussion groups and speaking engagements is that my perspective gets challenged by intelligent people struggling to apply the concepts to everyday life.  One such magical moment arose this week, when a participant in our chapter-by-chapter exploration of the book gave us a perplexing anecdote to puzzle out.  Let me first set up the context...

We were discussing Chapter 3 (Money - The Number Culture), which includes a brief history of money, from the days of barter through to today's banking databases.  One of the propositions of that chapter is that the barter of goods or services between two willing participants is always a win-win transaction.  Both sides are getting something they want, and either employing a skill that they already have or giving something that they want less - hence the net value of both sides goes up.  Such an exchange feels quite different when you instead look at two separate transactions that use money to quantify the value. 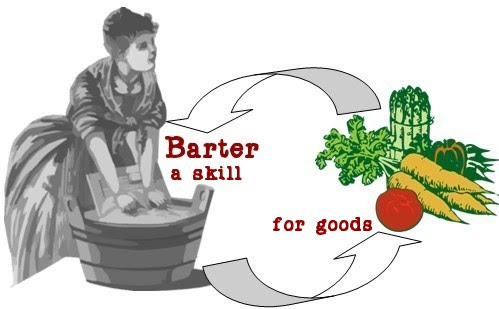 Barter actually capitalizes on the concept of marginal value.  This economics term is used to convey the idea that the 'value' of a particular thing (to us) depends on the quantity of that thing that we already have.  If I have hundreds of arrowheads, their marginal value to me is low, but if I have no baskets, the marginal value to me of a needed basket would be quite high.  I would be very willing to trade a few arrowheads for a basket.  Barter works when I find someone with many baskets (each therefore having a low marginal value for them), who needs an arrowhead or two.

So back to our story.  The reader who shared the anecdote is an organic hobby farmer of sorts.  She keeps a variety of livestock and is an enthusiastic promoter of permaculture practices.  As she relates it, she had an experience where the long hours of back-breaking farm work had taken its toll and she wanted to get a massage.  She had met a masseuse who was open to providing such a service in barter for some of the meat that the farmer raised on her land.  Learning that the typical price for the service was $80, she gathered up $80 worth of organic beef and went in for the relaxing treatment.

Alas, afterwards, she was disappointed by how she felt about the transaction.  Perhaps while in the midst of having the knots removed from her back, she was thinking about all the hours of work that had put them there: looking after her stock day after day, mucking out stalls, and hauling buckets of food for the grain-fed beef.  And, in exchange for a significant portion of the end gains, she was getting perhaps less than an hour on a massage table.  It didn't feel right.

This struck a chord with me.  In a later chapter (Ch. 5 - The Value of Time), I talk about how difficult it was for me, as a newly self-employed person, to set a billable value for my time.  I might do a day's work with community not-for-profits for $100, and then do the same work for a large corporation and bill more than ten times that amount.  So what was the true value of my time?  What should I bill clients who fell in between those extremes?  Was it right that the client's budget always determine my fee?  How could I determine if a particular project remuneration was "worth my time"?

My ultimate solution was how I felt about my contribution and corresponding compensation.  If I felt I was being taken advantage of (or was taking advantage of someone else) I felt bad.  Otherwise, I would consider the project a fair transaction.  The numbers played no direct role.  Now here was this woman voicing a familiar reaction:  the massage-for-beef transaction didn't feel right.  But this was barter!  So what went wrong?

Most people initially see the disconnect in terms of the time differences.  Farmers work long hard hours to grow, maintain, harvest, and prepare their produce for consumption.  And here was my friend, trading a chunk of that for a service that was provided in a tiny fraction of that time.  I agree that this would certainly be an influence.  However, quantifying time and worth is full of all kinds of pitfalls.  There are so many added variables.  A dentist charges not just for the half-hour of teeth work, but also the training, capital costs of the office, etc.  Part of a masseuse's fee has to take into account that they don't usually work full 8-hour days.  Nor can they leverage economies-of-scale to massage more than one client at a time, the way a farmer might be able to double their herd with minimal additional effort and overhead.

No, upon reflection, I think something much more interesting happened to this transaction.  The clue is the $80 value.  The reader had looked up the posted value of the massage and then tried to put together a package of food that had the same monetary value.  To me, that is not really barter.  That is simply a transaction, using prices on both sides, that happens to use meat as a currency.  Marginal value was no longer a key component of the feelings of value and worth.  Instead, both players reverted to the quantified market value, which completely alters the quality of the relationship.  As soon as the numbers come in, the barter doesn't even have to take place for the farmer to feel disappointed.  She could simply contemplate how she had just paid $80 for a massage and then later think about how much work had gone into a totally separate sale of $80 worth of beef.

That's the thing about numbers and number-based values.  They allow us to do things like instantly compare our salary to that of our spouse or a co-worker or a professional baseball player.  Or compare a season of livestock management to a spa treatment.  Such pursuits often to lead to bad feelings, no?
Posted by Andrew Welch at 10:29 AM